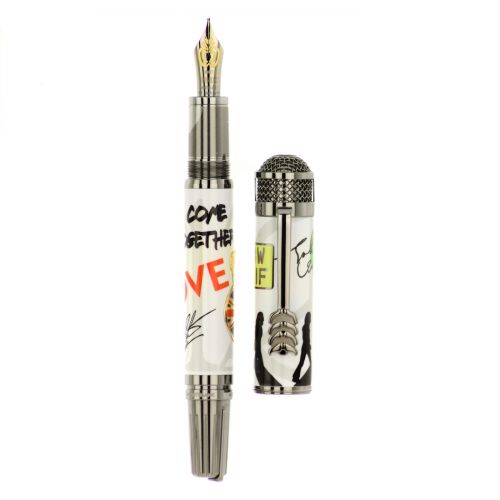 Skip to the beginning of the images gallery
The Beatles are one of the most famous rock bands in the world. The group, formed by John Lennon, Paul McCartney, George Harrison and Ringo Starr, was the most innovative and influential music phenomenon of the rock era. At the beginning of the 60s, their enormous popularity was initially affirmed as "Beatlemania", but with the passage of time the sound of the group became more sophisticated, thanks also to Lennon and McCartney, the main duo of the band's composers, arriving thus representing the ideas shared by the counterculture of the 1960s. The cone is inspired by the mixer button in the famous Abbey Road recording studios, while the hood picks up the studio's microphone shape. The clip symbolizes the iconic mustache of the Beatles in their portrait .. The body and the hood are lacquered with some metal inserts. Finally, the limited edition of 1,969 copies refers to the year of the legendary album "Abbey Road". Ident: 116259 Piston fountain pen Hand-crafted Au750 / 18K gold nib with special rhodium finish design Montblanc ink: Mystery Black (black), Royal Blue (royal blue), Midnight Blue (black blue), Burgundy Red (burgundy), Lavender Purple (purple), Oyster Gray (gray), Toffee Brown (brown), Irish Green ( green), Corn Poppy Red (red poppy)

Order fulfillment
Orders are processed from Monday to Friday from 9:00 to 13:00. They are processed within 48 hours of receipt of the order, and shipped after the control carried out by the company that supervises the payments. Orders placed during the sales or promotion period may be slowed down. Please note that all customs duties are the responsibility of the customer.

Return
If, within 14 days of delivery of the goods, you are not satisfied with the products purchased, it is therefore possible to request a return and obtain a refund of the purchase price.

Find out more about Shipping and Returns

Thanks to direct and consolidated relations with designers, manufacturers and authorized dealers, Wondersmall offers a selection of top quality products and authenticity guaranteed products.
All the shipped goods are provided with a warranty seal and with an authenticity label (unless otherwise noted on the product page).